Ok G's got me beat. Although before I got into TC, I was a volume per day person. Kinda hard to do on the DS now, but I'll be back to free school internet in a bit over a month, and I'll try to beat my "read all of D. Gray man in 4 days w/ a 5 page paper due" personal record. I had to get an extension for the paper

...I wasn't here much yesterday because I was reading hunterxhunter.

I'm at chapter 60 so apparently I like this manga.

haha! nice. Bishop tried getting me into the anime a long while back, so i assume its a good series.

The issue I have with it is so many people here read it : o

I thought the point was to try new stuff.

Metal Rabbit wrote:The issue I have with it is so many people here read it : o

I thought the point was to try new stuff.

Richter Albend wrote:I havent read the reborn manga so I would of been fine with that.

Its just as good. Bloodier, so yeah. No filler, though the last 2 filler arcs were VERY good as they gave backstory on characters mentioned alot through the manga who are never shown (The arcablaneo and the 1st generation vongola family)

Anime also has less of the stupid Daily life episodes, but depending on your reading speed takes longer. I'd do both if possible it's good enough to go through multiple times. I plan on catching up in the anime whenever I get the chance.
_________________

Yeah, im on my 3rd run of the future arc. I've seen the Mukuro and Varia arcs like, 4 times in the anime. I've only gone through them once in the manga though. Oh ur right, yeah the anime has less of the daily life arc. That and the art is atrocious at the beginning of the manga
_________________

G wrote:I say read gintama next for all of us, it is good, also while they do that arc should read reborn

He musta meant richter. anyway gintama's Jump so the first 20 chaps should be decent. but after that you never can tell what the quality will be like
I'm only half through with the Hunter 20chp assignment but so far I'm liking it.
_________________

Gintama is kinda speshul. Instead of long storylines a la bleach, it's more like sitcom episodes that last anywhere from a chapter to a volume. The actiony dramatic stories take longer normally. Most of the chapters up to date are short comedies.

TBH you could get away with reading less than 20 chapters and still have enough to talk about. Other than new characters being added in later, the manga uses the same formula over again.

since we're trying to promote new manga's that almost no one here has read then it should be gintama and then probably kekkaishi since I believe no one else reads that as well. Also both of them are of the same length right now
_________________

We can start discusing hunter now right? I really like it so far. In fact I didn't stop at ch20 and went to around 30 before I realized it. Gon seems quite refreshing as a Main Character. He has the trade-mark stubborness, but isn't hyperactive. He may have a little bit of the "superhuman even compared to the rest of the stories supers" cliche but he in no way comes off as potentially broken which will hopefully keep the story's enemies challenging. In fact he has a specific and unique skill set, that while being amazing in it's own right, keeps him and potential enemies on a reasonable level for when the villians are introduced. Even his "dark rival/friend/enemies when they grow up" Killua is a truly likeable character. His backstory isn't revealed much until past ch20, but it seems quite reasonable and probably overcome w/ just the right amount of conflict. All in all, it strikes me as quite a good manga.
_________________

I liked it more in the beginning where you all should have read through, because it was more innocent then. Plus it was before everyone developed superpowers like in any other shonen manga.

In particular I like Hisoka, who truly has no allegiance to anyone and lies just for fun. That and his pedofilia: 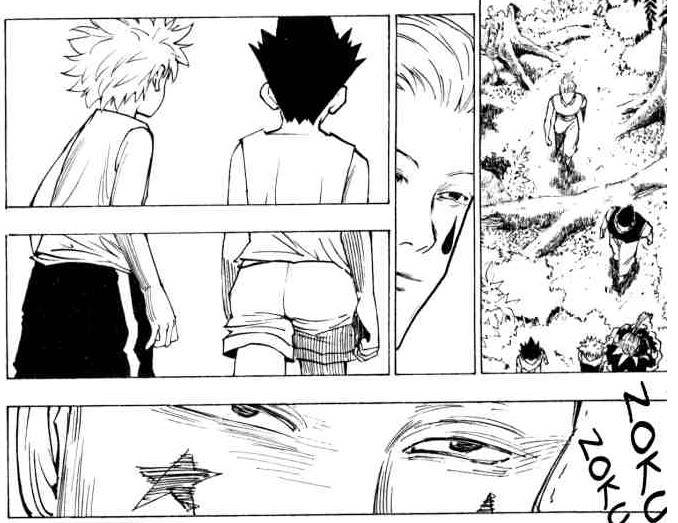 Hisoka was probably my second favorite character in the entire series, Kurapica was the first. anyways the first 3 parts of the hunter exam are pretty great especially when they're on the airship.

Spoiler:
btw if hisoka is your favorite character then after the game ends and they're out then hisoka is gone for the next arc. Also it gets pretty fucked up.

I've finished all there is of hunter hunter to date... and I'm saddened.


BTW did you guys ever decide on the next manga =__=
If it was gintama I'm good for a discussion anytime. I have 18 volumes of that shit on my shelf.